By now you’re aware of the pellet grill and how it’s been crushing it in the outdoor cooking market. Smokin Brothers has been making American made pellet grills and wood pellets for the last 10 years to rave reviews to both contest and backyard chefs alike.

Today, we’re going to be talking about the Smokin Brothers pellet grill and the brand new Premiere Plus that is showing exactly how American made makes a huge difference.

David: Alright, we’re here with Ryan from Smokin Brothers and Ryan we’ve got this new model here, why don’t you walk us through a little bit of what this is. Tell us about it.

Ryan: Well, this is our brand new model that we just came out with it’s actually replacing our Premier models that we were accustomed to making all these years.

On our Premier models, we always had wrap around lids on our grill. What that did, it helped keep the smoke in and the wind and the rain out of the grill.

We also have the center stack which the Premiere Plus still has the center stack. One of the things that we’ve changed is now we have a slide out rack. The rack slides right out, you don’t have to worry about pulling it in at an angle to pull it out. If you’ve got something sensitive that you’re cooking, you can just pick it all up and set it on the plate.

Now the other things that are coming new with the grill is Heat Wave technology. The Heat Wave technology is a product that we came up with last year. Now last year, what we were seeing is a lot of videos that people were wanting to get higher temps on their grills and direct flame and things like that, well when you buy a pellet grill, you buy it for no flames.

You don’t want flareups. You want those high temperatures, well what our Heat Waves do, they funnel the airflow of that heat coming up around the grill back to the grid surface. So, if you’re cooking at 300 degrees, you’re going to see 500 degree temps right on your grid surface with the use of our Heat Waves.

David: So, you’re telling me that if I’m running this grill at 300 degrees, that right over here is going to take this air and shoot it back across and I’m talking about 200 degrees higher?

Ryan: At least. Depending on the fan speed you have set in your grill. What’s even better about that it is transferrable to other pellet grills. It’s not just specifically designed for Smokin Brothers.

David: And I’m seeing stainless throughout here, what kind of stainless is this?

Ryan: We’ve got 304 stainless that we’ve been putting on here, and what we’ve, we’ve got the worksurface up front, so now you can easily clean it up, put it right back down, throw your food right on.

We’ve got even a stainless steel accent rain cap as well that we’ve designed. One thing that I like pointing out is the grid holders below, so we’ve added that as well.

Say you’re doing a 26lb. turkey, a big turkey that sits up high. You can take your top racks out and have a place to store them, rather than putting them on your patio table and your wife coming out and getting mad at you because your patio table is covered in grease.

David: I don’t know anything about that, do I Mrs. camera person? Now, so this ships with one upper rack, right?

Ryan: It ships with 1 upper rack and you can always expand it to two. And it’s a welded frame, so when you get this, this is a heavy duty grill. It’s designed for the elements, and it’s also designed to cook year round.

So, we double wall insulate the firebox as well as put fiber board inside that box.

David: So, you’re talking about an insulated firebox?

David: Now tell me a little bit about the controller here. We’ve got a controller here on the front, and this is where we have our pellet hopper, right?

Ryan: Yep, you’re pellet hopper is right underneath your work surface area. It’s a 20lb pellet hopper. The controller that we use is a PID version controller. It’s got a little fun stuff to it to make it better than normal PID controllers that are out on the market. Every 20 seconds it’s recycling and deciding what temperature or what auger percentage to actually put into the grill.

David: Cool. So, I mean this looks like a great unit, when is this going to be available for people to actually get their hands on it to take a look at it?

Ryan: Select dealers throughout the U.S. already have it in stores and we’re making the announcement live at the HPBA show. And then so, you’ll probably start seeing them trickle in there. And if you don’t have a local dealer in your network, get ahold of us on our website and we’ll put you in touch with one or we’ll service you direct.

David: Alright, why don’t you tell people where that website is.

Ryan: We’re at SmokinBrothers.com without a “G.” We smoked the G. So, if you type in “smoking” brothers . com you won’t get to us, but leaving out the g will get you there. It’s a couple brothers and my dad that run the business.

We look forward, we have fun in barbecue, and there’s no secrets in our bbq.

David: Cool, well hey Ryan, thank you, it was a pleasure. And we look forward to seeing more to come from this series.

Ryan: Thanks Dave for taking the time.

Question of the Day: Are you currently using a pellet grill in your outdoor cooking setup? If so, let us know why you added that pellet grill in the first place. Let us know in the comment section below, as well as your thoughts about the new Premier Plus from Smokin Brothers.

And if you want to check out some of our other coverage from the HPB Expo, we’ve got a wholeplaylist out and you can find it by clicking here: Barbecue Lab HPB Expo Video Playlist.

David is the founder of The Barbecue Lab, and it's his mission to make sure that outdoor cooks the world over are using the best bbq gear and accessories. David struggled with cheap grills and flimsy utensils for years and wants you to save money by buying the right gear the first time around. David is reluctantly on Instagram, but he's much more at home on YouTube and would love to connect.
Related Posts

The outdoor pizza oven has been around for decades, but in the last few years it seems like we all have to have one. We...

In the outdoor cooking world there’s nothing quite as hot as outdoor pizza ovens right now, and Alfa Ovens has been creating them for over... 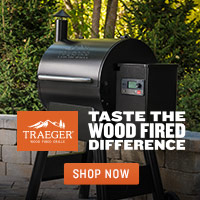